This post introduces you to Fleep.io a promising competitor of the group chat rivals HipChat and Slack, that comes from the Skype founders and tries to solve 'Email communication' just as well. It's small teams with lots of external communications in particular that might benefit a lot from Fleep.

Atlassian is doubling down on HipChat. That is a smart move, as instant messaging for teams and whole companies will probably grow as important as email in the near future. After Atlassian released HipChat Server that can be deployed behind the firewall we saw a lot of our customers go after the instant messaging offering. Right now we serve Atlassian's biggest on-premise solution, as far as I know. Those customers are even so big, that they exceed the official maximum of HipChat Server users and got a "beta license" to test and report back to Atlassian about performance.

Atlassian is still the only offering of it's kind behind the firewall, that I have seen as mature. I admit, that I have to give Mattermost a fair try. That's what their website says: "Mattermost is an open source, self-hosted Slack-alternative." And in a way that's also what the industry looks after: Slack is the competitor, that Atlassian is after as well. They have been so consumed with the competition of the Silicon Valley rival, that they even bought billboard ads in the valley to make sure, that the nerdiest of all tech geeks understand, that HipChat is here to stay.

TechCrunch knows, that "Slack’s rapidly growing communication platform already has 2 million daily active users, and 570,000 paid seats as of the end of last year." The tech news giant is as consumed with Slack and has posted 10 news items within the last month. That is more than two per week despite Christmas and new year's eve.

I personally never thought, that Slack will beat HipChat in the long run. It's ridiculous to see, that this app is valued as high or higher than Atlassian as a whole company. You probably have to live in the valley to understand that. HipChat and Slack are pretty much on par feature-wise with a couple of relevant upsides for Slack (e.g. UX and multi account support). But with the on-premise option, Atlassian is second to none for all big corporations today. They are all talking "cloud". But they deploy on premise if they can. And they can. HipChat server is reliable and fast. It's not cheap. But if you compare it to Slack, it is. 😀

Read my answer to Stewart Butterfield the founder of Slack about his quora post on Slack being cheap. I created a comparison table here: Comparison of HipChat, Slack, Jabber, XMPP, Lync, Skype for Business, Whatsapp and other group chat solutions.

But there is a now guy in town: Fleep.io. I was pointed to this service by my friend Gerrit Eicker (eicker.digital), who started to test it with me. We have done that often with promising new services. In the past, Gerrit has helped me test Google Wave for a TechCrunch post. We just did it again with Fleep. Here is a short summary:

Fleep is as slick as Slack. It integrates with email much better than Slack and HipChat and is currently cheaper than both services (at €1 right now and €3 per user and month in the near future). It has a stunning web interface, native clients for all relevant mobile and desktop environments and integrations with third party apps, that have made HipChat and Slack so incredibly powerful for a lot of teams.

This is a feature,  where Fleep.io really kicks ass. That's how they describe it themselves on their homepage: "Fleep is for bringing all your written conversations into one place. Use Fleep to chat with your team, partners and clients. If some of them are not Fleep users yet, you can include them in the conversation with their email address and they will receive all the messages and files as normal emails." 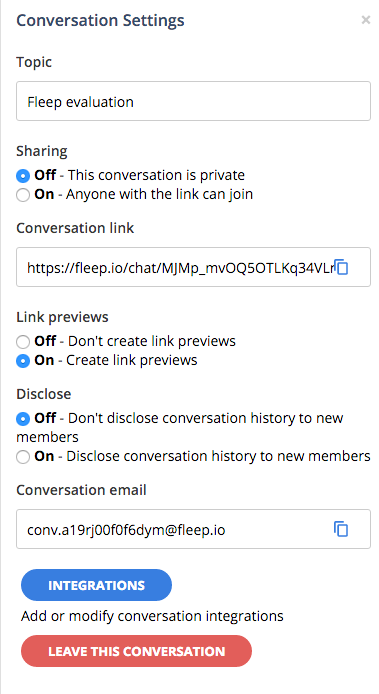 The screenshot above does not look too exciting and a bit nerdy, but it's a game changing offering in comparison with slack and HipChat. The special link and the email address allow anyone to join the conversation easily. It does not matter if they have a Fleep user or not. Not only is this very handy when trying to integrate customers and outside people. It is also smart, because it will help the service from Skype founders in Estonia to grow faster into new areas. Slack and HipChat are very much tailored to one company or one group and have difficulties in offering a seamless experience if you work in multiple groups across very different companies and areas.

A fusion of Google Inbox and group chat

Another big advantage is the approach to conversations. In HipChat and Slack you have groups. In bigger companies, those can grow dramatically. Similar to the way Google Inbox groups and handles your emails, you can see and archive conversations in Fleep. That's impressive and a very good idea to handle the high volume of incoming stuff in such software platforms. 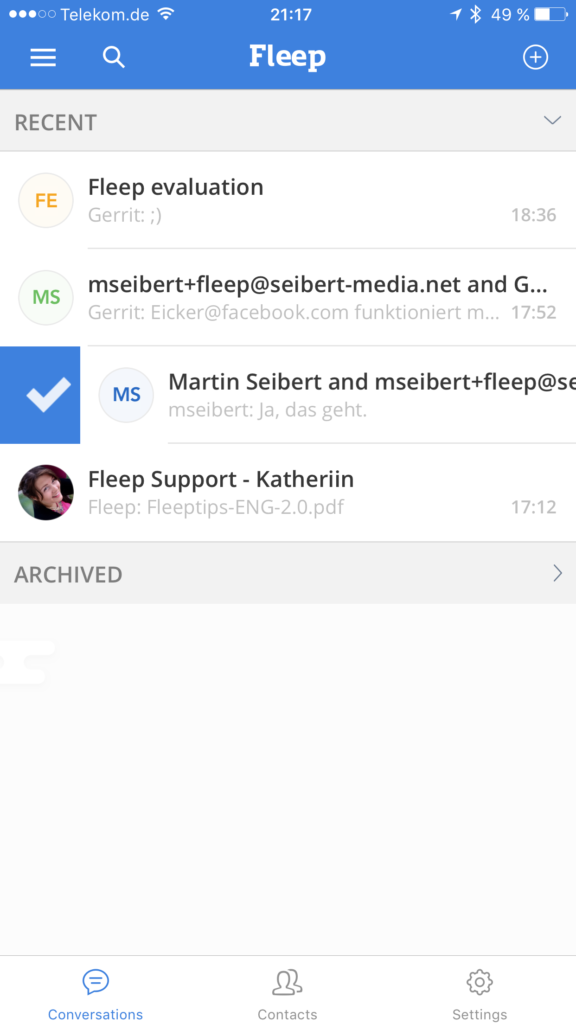 With 11, the amount of integrations with Fleep is far lower than with Slack and HipChat. Slack has an App directory and claims to have more than 150 apps in there. Atlassian HipChat has 118 integrations in their marketplace at this point. 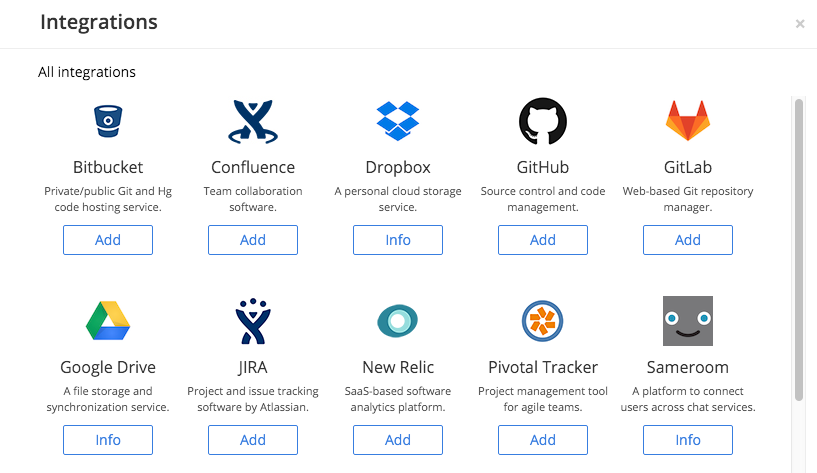 Fleep has a nifty feature for taking a post of someone else, quote and comment on it.

Build in tasks and more stuff

Every conversation can have mentions as in Slack and HipChat, but also tasks. Those tasks are shown in the right colum that is expandable. I am curious when Fleep will add white labeling and custom domains for the email integration.

We had a long Q&A session with Katheriin from Fleep Support, which is publicly available here. (You seem to have to register with Fleep though ... - couldn't test that properly.) This is the relevant part:

> 1. Security? Does Fleep encrypt messages?
Fleep is pretty much as secure as it gets. We use SSL encryption with Perfect Forward Secrecy between the user and our servers, messages and files are stored on servers in an encrypted form. Our servers are hosted in Amazon EC2 data centers in Dublin, Ireland and they have a high level of physical security + the added protection of the EU’s tight privacy and consumer data laws. As an Estonian company, we do have to obey local laws - so if the local jurisdiction would request access to the encrypted info, we would have to obey. But this has not happened once to date.

> 2. White labeling? Will there be a way to use our own TLD?
> 4. Are you thinking about an on-premise solution?
Both of these will probably be an option in the future, but not at the moment.

> 3. API? Where do we find background infos regarding your API?
This page should answer most questions you may have about our API: Fleep API.

> 5. Do you have experiences with non fleep users and the email integration? I fear that fleep could tend to become very spammy for them. Do you restrict yourself, if you know that external people are part of the conversation? Does it work?
Yes! I definitely take into account when there are people included with their email address or when I have a 1:1 conversation with someone who is using email. However, Fleep is smart enough too, to group together messages that have been send within a 30sec interval. So if you or someone else sends a few quick short messages (hitting enter), maybe forgetting about the email participants - Fleep groups those messages together as one email. It does take some discipline, but the user experience is worth it.

> 6. Is there a roadmap regarding the “team management” functionality? Or differently asked: What makes “Premium” premium?
We plan to launch the team management features in the second half of this year. Otherwise, we haven’t focused on the Premium package too much at this point. We have focused on user growth and making the experience with email better - Premium will be our next focus.

> 7. How many active users do you have as of now?
Oh, yikes 🙂 I’m afraid I’m no allowed to share the exact numbers - but I can say that we have about 40,000 sign ups to date, and the daily active are in the thousands as well.

> 8. Who do you think your main competitors are? How do you approach the market differently?
Great question! Our main competitors are email clients, really 🙂 We have been compared with a lot of team messengers (e.g. Skype, HipChat, Slack), as the interface and user experience is similar, but really - there is no one doing what we are doing currently. Most team messengers are closed islands / closed systems - so you can only communicate with those who are on that platform. For Fleep, it’s super open, as we have the bridge with email. So yeah, email is our main competition

> 9. Do you have doubts that your business model could not work as you are so open? It's clear how the HipChat and Slack turnover grows. But with your service it's easier to integrate people from free accounts.
We believe that the Team Management features will be essential and very necessary for business users - and that will drive revenue.

> 10. Are you VC-backed? Who? How much? Valuation?
Not yet. All of our funding info is public here at this point: https://angel.co/fleep-1.

> 11. As I’ve just posted my eicker@fleep.io on Facebook: Does Fleep have a spam filter for incoming mails?
It is work in progress and will be launched within the next month or two (already used by experimental users) - currently, you can just report any incoming email message as spam

Fleep.io is something that has been around since late 2012. I am a bit surprised to not see that earlier as it is pretty promising. For the customers we are working for (big corps) it's just a nice example but nothing that I could remotely pitch, as those customers still heavily rely on 'owning and controlling their own data' despite everyone talking cloud night and day.

I am excited when HipChat UI Extensions really start being integrated in the apps. That could be another game changer and lead to a situation, where HipChat really becomes the center and "OS" of daily communication and decisions. For our customers who are mainly big companies with thousands of employees, HipChat Server is the only on-premise solution for group chat, that I can recommend and I am eager to see, how this market evolves in the future.

What do you think? What group chat solution do you use? What do you miss? Would you like Email integration like in Fleep? How important is on-premise for you?