At //SEIBERT/MEDIA, we've been thinking a lot about how to become more socially involved as a company. We're slowly beginning to discuss the creation of our own foundation. But if you want to help effectively, you shouldn't just jump in and start, but rather learn from others first.

We asked Atlassian for some guidance, as they have been supporting such projects with the Atlassian Foundation for many years. We got a prompt answer: Send someone on our Cambodia trek!

That's how from the 5-9 December 2016 one //SEIBERT/MEDIA employee - namely myself - joined the group of 20 Atlassians from diverse locations around the world, on their Foundation Trek through Cambodia.

Atlassian undertakes this trek annually in cooperation with the nonprofit organization Room to Read, which is mainly engaged in Africa and Asia, to provide children with access to education, especially with books and literacy. Another focus of Room to Read is girls' education, especially in Cambodia, where girls often leave school after just a few years to marry and manage their households.

To break the cycle of poverty, Room to Read encourages girls to build their self-confidence and self-awareness, so they can finish school, study, and lead their own self-determined lives. The Atlassian Foundation has worked closely with Room to Read since 2009. 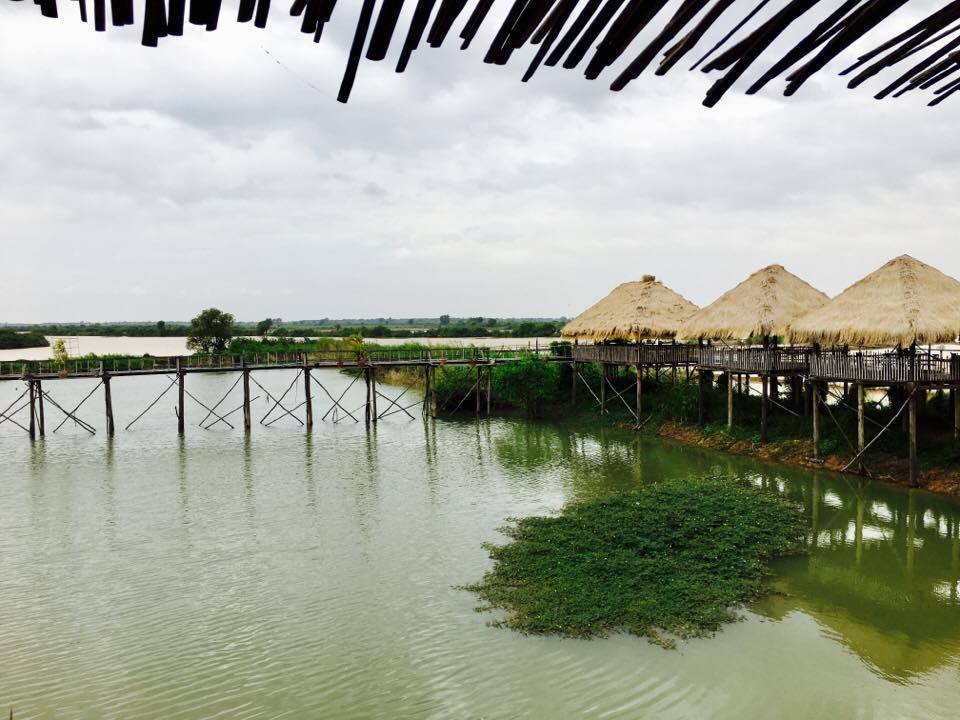 Cambodia is still a battered country. Although the downfall of the Khmer Rouge was several decades ago, this Southeast Asian country started moving towards democracy in the early 2000s.

During the Pol Pot regime from 1975, the educated upper class of Cambodia was a victim of the cruel genocide. Nearly ninety percent of teachers were murdered. When Cambodia was liberated from this frightful regime in 1979, one quarter of the population lost their lives.

The aftermath of the regime's plan to turn the country into a kind of agrarian-socialist society is still noticeable. Even today, a great many people are employed in the agricultural sector. It was all the more moving to be able to personally experience how  Atlassian makes an impact through Room to Read. 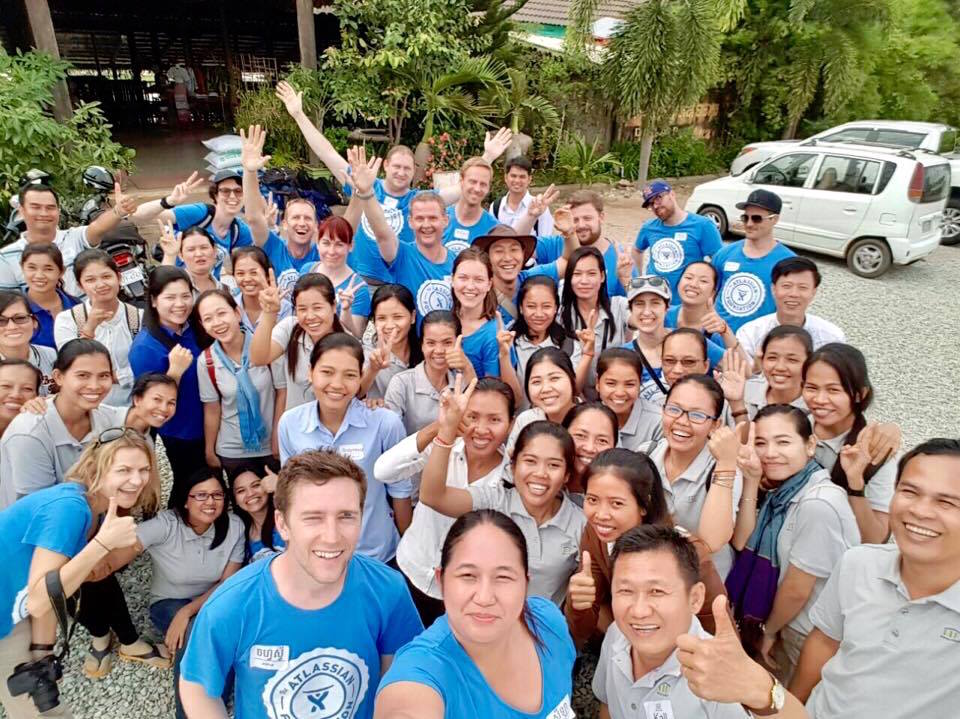 The trek was separated into two parts. The first three days were spent together with Room to Read in different schools. Talks from teachers ranged from the importance of attending classes, to the closure of a primary school. We then split up into smaller groups to visit other organizations supported by the Atlassian Foundation.

After a 1.5 hour bus trip, we reached the Prey Sla Primary School, where we were allowed to attend classes 1 and 2 during their Khmer lessons. It was touching how incredibly grateful the parents of the kids were, when they showed up to support the Room to Read program. Some brought us sticky rice with bananas to show their appreciation.

Afterwards, we sat with some of the parents to discuss the school, their children's future prospects, and their current challenges. Always present: The local translators. 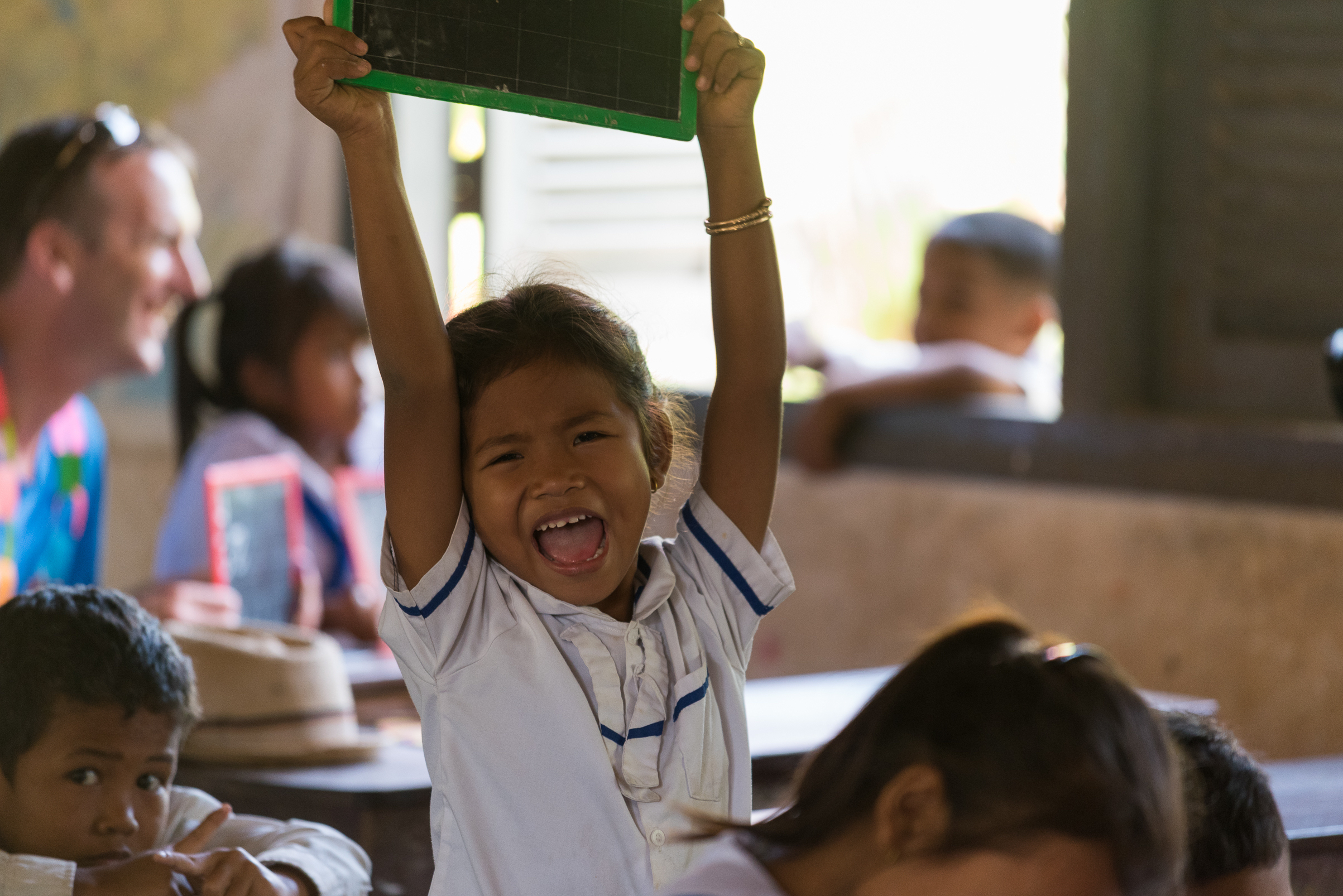 In the afternoon we went to the Melaung Primary School, also in Prey Veng.  After a welcome ceremony, we watched part of a theater performance by the kids who presented their favorite book "Joch Joch, the Racing Frog". Afterwards the children proudly showed us their books in Khmer and read them aloud. It's impressive how much English knowledge the little ones already have! We also visited the school library built by Room to Read.

Then the time had come, not just to observe, but to create: Together we created a new painting for the school with the theme of the underwater world. (Ideas and skills for a new meeting room design were also shared 😉 ) 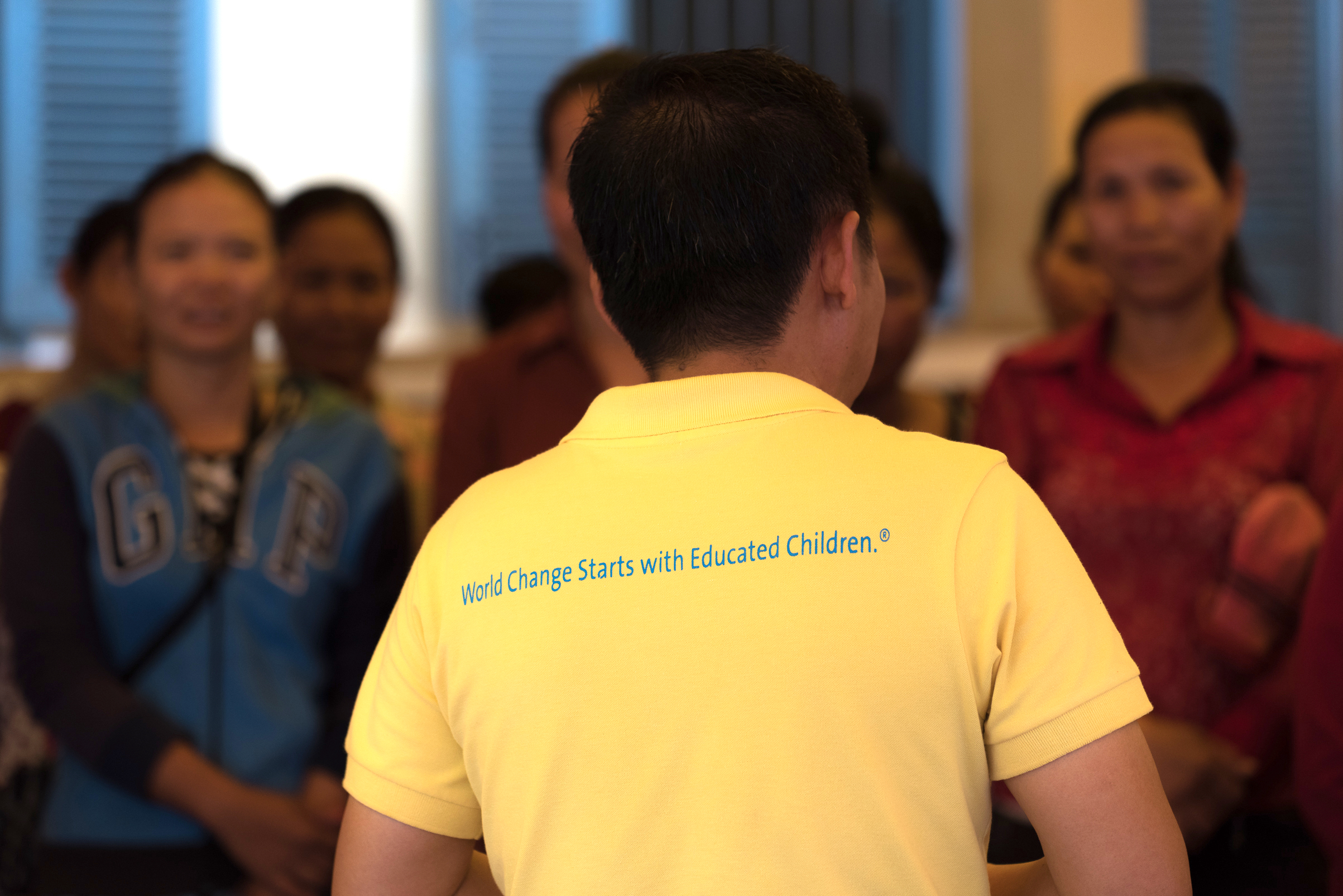 The second day began with a visit to Sramar Secondary School. In small groups, we developed various life-skills topics from the areas of teamwork, goal setting, career planning and time management.

After lunch, we participated in a game, organized annually by the school, to help the children gain practical experience in the field of business. There were five different market stations, each of which offered various products. At my stand we sold local fruit - and we were damn good at it! 🙂

The students are given a fixed budget, which they then manage and use themselves. Some Atlassians, like me, were active at the market stalls, while others formed a jury and oversaw the market. Finally, we counted the revenue, evaluated the results, and discussed them with the pupils. An exciting experience! 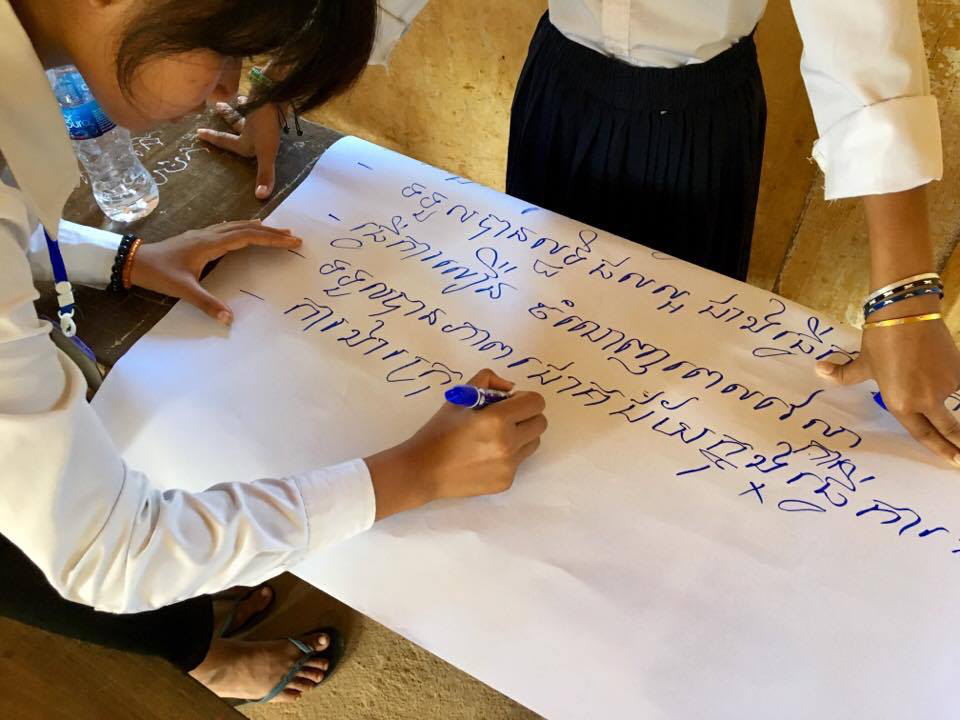 The third day consisted mainly of visiting houses in small groups to see the girls of Sramar Secondary School. I was staying in one girl's house in which 13 (!) people live: The grandmother with her twelve children, grandchildren and great-grandchildren! Houses are essentially huts with dirt floors. There are no sanitary facilities in baths, no running water, and animals (cows, dogs, chickens) live together with people. It was very much a culture shock!

This, however, quickly disappeared into the background when the grandmother told us of her disturbing life. Under Pol Pot, she was forcibly married to a strange man and had to move to the countryside to work in the fields. This story affected us all greatly.

On the upside, it was incredibly beautiful to see how inquisitive the children are. The girl tutors her classmates on weekends and tries by any means to learn English, although nobody speaks it in her family. Hats off!

Although there is still much to be done in this country, it is clear in many places, how much people want progress and how strongly they are committed to it.

We drove to Kampot early on Thursday, to visit the textile company Dorsu, where Atlassian produces sustainably manufactured shirts. Dorsu manufactures textiles while providing fair conditions for both the people and the environment. Hanna Guy is one of the two founders of the company, originally from Australia.

The relationship between Dorsu and Atlassian goes far beyond mere business. Both sides learn from each other, help each other with their experiences and insights - Dorsu in the area of sustainability, Atlassian on teamwork and cooperation. During the two days we spent in Kampot, we participated in workshops on the topics of team building, feedback and design-oriented thinking. In this context, we carried out health monitoring checks and participated in various additional activities such as "building bridges". 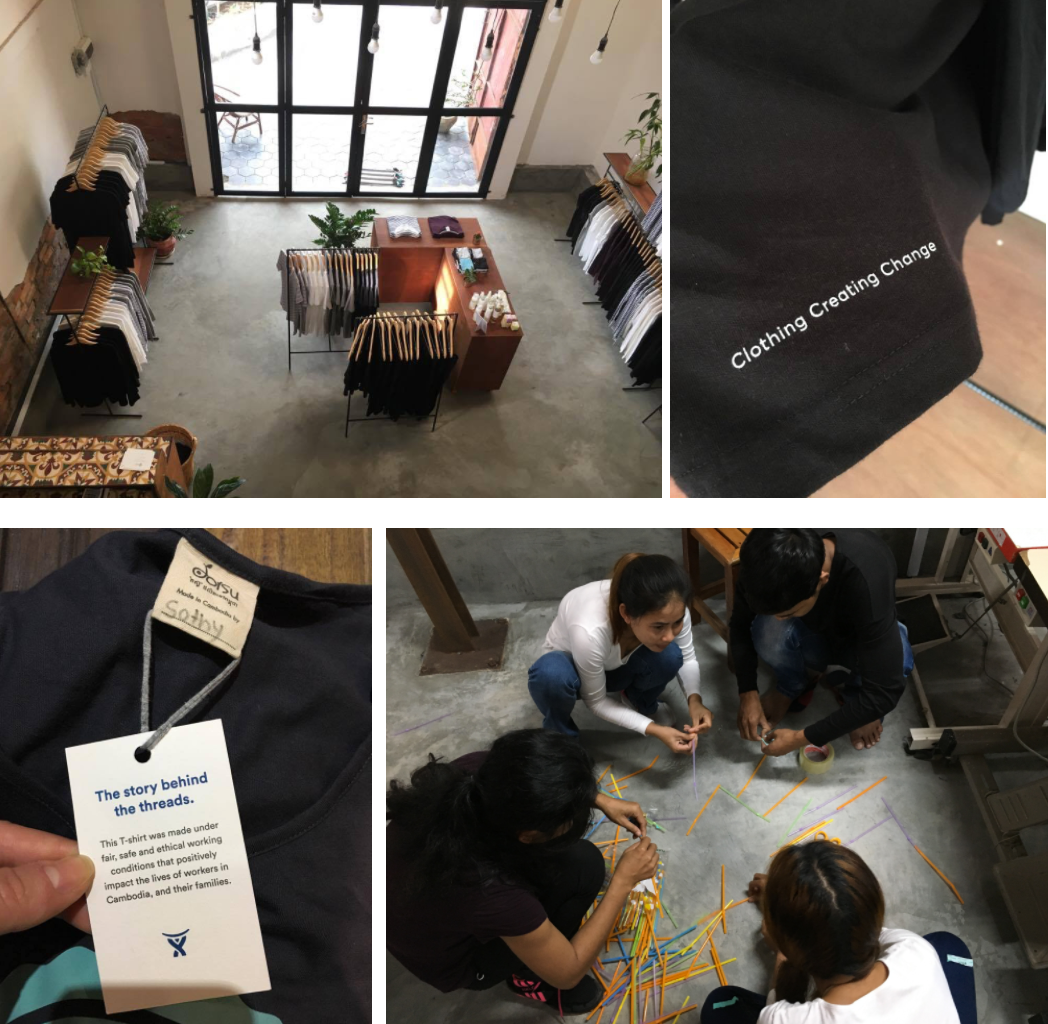 Overall, the trek was a valuable experience for me personally, and for our own commitment as a company. I received many suggestions and insights, which will help us to help in the future in a targeted and effective way when we consider starting our own foundation. I am very grateful to have been part of this trip!