How it all began

When I started my internship at Homepage-Design Seibert (as they were then known) in 2002, I had no idea that this company would one day finance a private flight to New York. Back then, no one was considering giving gifts or bestowments to employees for their corporate anniversaries. It was after all, still early days. We had only just entered the market a few years ago and our primary focus was to ensure that we built our business into something great.

Many years later the introduction of the agile organisation (AgileOrg) to //SEIBERT/MEDIA lead the company to examine its corporate culture with a focus on factors that are sometimes overlooked. It turned out, we now had many colleagues with 10 or more years of loyal company service, and this prompted the question of what we could do for them as a gesture of goodwill. As far as I remember, we returned from a strategy meeting and brought our idea to the table.

One of the first suggestions was to grant 20 days of special holidays as opposed to bonuses, which is usually the case in other companies. The idea behind it was that the employees would use the extra holidays to have an experience which they would remember many years into the future. Basically time, instead of money. For many of us, more money would mean that we could pay off one more bill or debt, or have a balanced account at the end of the month. Sure, this sounds nice, but I bet it’s not something people would talk about for years to come.

At this point we were still missing the spark for the grand idea of the “company anniversary experience”. And this is where the company credit card was brought into action!

Giving experiences instead of golden badges

Since we make a lot of financial transactions on our credit cards - for example, purchasing licenses at Atlassian - we collect an insane amount of frequent flyer points on our Miles & More account. Naturally we use them primarily for our international business trips, however, even our frequently travelling consultants could not take enough plane trips to deplete our stockpile of points.

During one AgileOrg session, our colleagues spent a lot of time discussing and calculating how we could split the flight miles fairly, so that future generations of employees nearly at their own 10th work anniversary could also receive their share of the benefits.

I was shocked when I was told that we would receive 20 special holidays AND 200.00 flight miles for our 10 year corporate anniversaries, granted retrospectively. “Are they crazy!?” I immediately thought to myself. On the other hand, I very much appreciated 4 weeks of extra holidays and the opportunity to fly for free, especially together with my wife.

It was pretty clear to us straight away, that we both wanted to go to New York. The icing on the cake was the fact that the miles covered flights in business class. Now our trip had definitely turned into an experience! My colleagues supported me as I completed all of the formalities and requirements for entry into USA and booked flights. 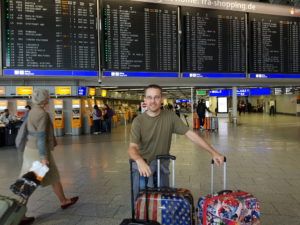 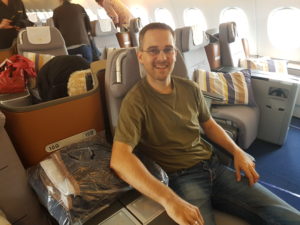 It took a couple of months to get the ball rolling, until the journey really began. I must say that the whole check-in process is just so much easier when you’re in the business class. The line we had to wait in was … Hold on … there was no line, our turn came straight away, haha, how cool is that!? And then came the business lounge; buffet, drinks, newspapers and a great view of the planes and out onto the tarmac, glorious and most importantly, free. Let the holiday begin!

In the plane itself we were awestruck again, as we stood in the spacious area where both our seats were situated. Wow, tall and wide seats, almost a meter of space in front, footrests to stretch out our legs, or even take a nap in a fully reclined position. You should have seen it! The service onboard was also amazing. Even though the flight was scheduled to take almost 9 hours, the time passed rapidly. 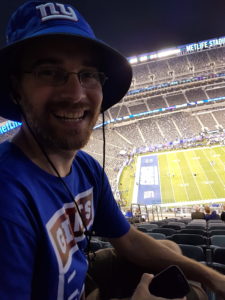 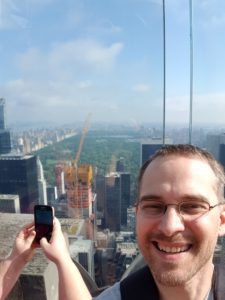 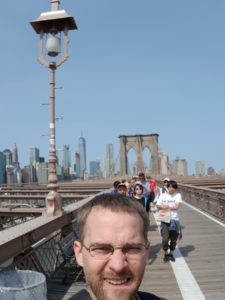 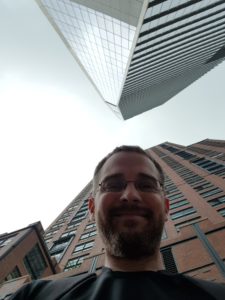 The 15 days in New York were magnificent. All costs here were paid privately because of course “only” the flight was gifted by the company. That was more than enough. In New York we participated in a full blown tourist program for ten days and visited all the typical landmarks before spending the remaining five days relaxing and strolling through town. We even attended basketball, baseball and football games. Armed with two phones, we took over 3,200 pictures and short videos to help us remember this wonderful trip for a very long time.

What a small world!

During the second week we found ourselves in Brooklyn and discovered the perfect place to shoot a thank you video for our colleagues at //SEIBERT/MEDIA. Obviously I did not want to leave this detail out: 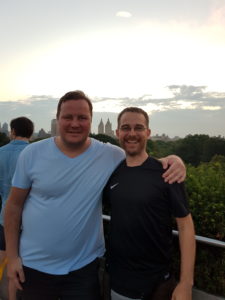 In the early stages of planning the trip, my team member Martin told me that he was coincidentally also going to be in New York at the same time. Of course we had to meet up! We enjoyed a gorgeous sunset on the rooftop terrace of the Metropolitan Museum of Art and a view of the skyscrapers lighting up the night, while we spoke about the sights we had seen and the various tourist places we had visited .

As we stood at JFK airport at the end of the trip, we had another chance meeting with a //SEIBERT/MEDIA employee. This time it was Micha, who had just come back from a week in New York himself. You fly to New York once in your lifetime and within a couple of days manage to meet two work colleagues there. Something like that would only happen at //SEIBERT/MEDIA. 🙂

The return flight was also splendid. This time we sat on the outer seats so that one of us could look out the window. Seats, space to the seats in front, and the service in business class was top notch, just like on the way there. Again, the flight passed quickly and we landed in Frankfurt in the early hours of the morning.

We have now defeated the jetlag and have retold our adventures to family, friends and work colleagues countless times. We are constantly catching ourselves saying “We’ve been there!” or “We know this street” during every movie we have watched since that was set in New York.

In my opinion //SEIBERT/MEDIA achieved exactly what they intended with the gift for my corporate anniversary: I will remember this trip for the rest of my life and will be able to tell others about it. As your everyday-average person, I had only ever flown in economy until now, and therefore I thought the flight itself in business class was spectacular. Even having the extra holiday time, the whole month of September 2017, almost faded in comparison.

Although I have already mentioned it multiple times in person or in writing, I would like to take this opportunity again to say thank you to my dear colleagues, who have worked hard over the years so that we are able to receive such amazing gifts for our 10th work anniversary! And now had I better get back to work so that other people can also enjoy such an incredible trip in the future!

Employer branding: Original activities for an even better working environment

Agile organization at //SEIBERT/MEDIA – from brainstorming to realization