This is for Apple fanboys who think that Android users are underprivileged and lack the joy and fun that an iPhone brings to your hands. It’s bullshit. If you try what I tried, even Apple-biased nerds will need to admit, that Google is on the same quality level today. Learn how and why in this article.

Back in the days before I switched to Mac OS, I could not imagine, that anything could beat my beloved Outlook on Windows. That was probably 15 years ago. Mac OS conquered my daily routines quickly and easily. About a year or two ago I could never imagine working with emails through a web interface. Email was strictly tied to Mac mail and fat client software on my Mac. Google Inbox taught me I was wrong. I am processing emails on my iPhone and through a web interface today. And I love it.

Are you ready to drop your iPhone and use an Android device tomorrow? I never would. That’s at least what I thought a couple of weeks ago. But why not test this assumption?

So I went ahead and bought a Huawei P9 lite for €229 (about US$260) in a local shop together with a second SIM. And yes, I had a business excuse as well: We’ve created an Android app for our Linchpin intranet suite and I wanted to be able to test it.

The setup for the device comparison was simple: same phone number, same carrier, same accounts. But the Android device is less powerful than my comparison device, an iPhone 7 Plus which is about four times more expensive.

So for everything impacted by hardware, iOS (the iPhone) really had an unfair advantage.

I already tried Android back in 2013. I was in San Francisco and Deutsche Telekom ripped me off with their expensive roaming tariffs. The Android device back then was US$100 and not worth the try. It sucked.

In contrast the P9 lite and largely the Android OS grabbed my attention. I will lay out in detail, why I believe this, but let me start with my conclusion:

If you have an iPhone and still look down on the poor souls that use Android devices (like I did): Stop it. It’s bullshit. Android is on a comparable level in all relevant dimensions like apps, UX and features.

The biggest problem for me is that I have to let go of my monolithic view on devices as an Apple fanboy. It is okay to buy an Android device. And it may even become a choice that I’ll make one day. Can you imagine?

With our new mobile app for Confluence-based intranets I encounter more and more “massive companies” that want to know how they can get thousands of employees, without a desktop computer, informed and connected to the stream of information in their company. There are basically two ways: Every employee uses his own smartphone (“bring your own device” or BYOD), or buy one for every employee (which can be costly at scale).

I have seen some weird plans. One customer bought heaps of Windows phones after Microsoft announced it was discontinuing development, for a bargain price. Others only buy iPhones, aka THE best, for a very limited number of elite employees. I am in Germany, and privacy and security are one of our customers’ top concerns. I am in favor of a BYOD concept as all employees do have smartphones already and it is easy to implement. However, if you are thinking about buying heaps of devices for (all) employees, I would recommend Android phones today. They are cheap, the UX is comparable, and the interface is easy enough that 5-year-olds can master it.

What phone do I automatically reach for now?

In my daily usage, I have reverted to using the iPhone by default. I still use the Android regularly. But if it’s urgent, or I am not actively thinking about the outcome of this experiment, I tend to grab the iPhone 7 Plus by default. My explanation is that its hardware is better. I can start the camera faster to snap a photo. It will unlock faster. I doubt that the same would hold true if I had run this experiment with a Google Pixel.

The test if small kids can work with a phone has worked quite nicely in the past. My kids got free access to an Android tablet two years ago and abandoned the thing permanently after failing to cope with the UI after some trials. They are admittedly older now. But after trying to press the “home button” on the Android device, in the same way as they know from our iPhones at home, they worked out what the three buttons at the bottom did, and everything else fell into place. After installing some games (how could I forget?!) Android is an accepted device now. They have even claimed that the device must be for kids, because no one needs two smartphones!

This experiment has to end. My conclusion is that Android has become an operational system on par with iOS. This is a bad message for Apple and it should frighten them. The iPhone is their main driver of revenue and profit. People have long waited for the iPhone killer to suddenly emerge and take out Apple’s flagship product. But it’s likelier, that while Apple fanboys live in their happy Mac world, Google products gradually improve to a point where no one can tell the difference. But wait, there is a clear difference between a Huawei (€220)and a iPhone 7+ (€950).

Your prices may very well kill you one day Tim (Cook). 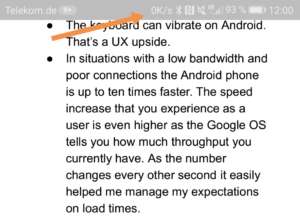 This is not a complete comparison of Android and iOS, it’s simply many things that came to my mind when trying Android after a long break.

In summary, I think the time is over when the Apple community could look down upon Android users and mock them about the poor UI and UX of Google OS. Android has not only become the player with the higher market share, it is on the same level as iOS when you consider many other quality dimensions.

Linchpin intranets: What the mobile app does for employees on the go
Professional mobile apps for group chat, intranet, etc.: A blessing or a curse?