The World Robot Olympiad (WRO for short) is a worldwide robot competition which came into being to get kids excited about science and technology. Together with a trainer, children and young adults work in teams of two or three on different tasks which are set each year.

The national climax of our WRO is the German Final, in which teams compete in various categories with solutions that they have developed themselves, to qualify for worldwide WRO events.

One of these is the football category. Here the young people build and program robots from Lego and then compete in a robot football tournament.

For some years now, we've been running our project programmieren.de (in German): Every fortnight, we invite interested children and young adults to visit us, and we teach them the basics of programming for free, in modular, web-based courses. Beyond this, we also continue to support projects and schools - to pull out a nice buzzword - in their very own digital transformation.

We've already taught programming to third and fourth graders, built a new website – and most recently, the students and teachers of the Rudolf Dietz School in Wiesbaden/Naurod were delighted to receive a set of new notebooks to use in class.

The Immanuel Kant School in Ruesselsheim was the first school that we sponsored with programmieren.de – and we still sponsor it to this day. For years now, we have been working with Christian Duncker, who leads a working group project called "We, RoBITs” with students at the IKS.

We, RoBITs – Winner of the football category

I have now received terrific news from Christian:

We did it!!! We're in the international final! Thank you for your long-time support! Now Team Germany is going for gold.

On June 16 and 17, the We, RoBITs team participated in the 2018 WRO German Final in Passau – and their project "Error 404“ took first place in the Football Category (in German)! So the team of the Immanuel Kant School has qualified for the World Final. The next step after the national German championship is the Champions’ League. The prize-giving ceremony was officiated over by the Lord Mayor of Passau.

The students, like Oskar, are proud, and rightly so - we congratulate them! And good luck Team Germany: Show the pro-footballers how it's done! 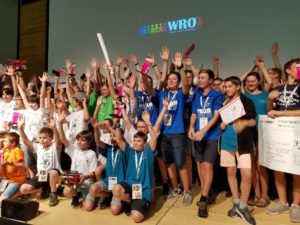 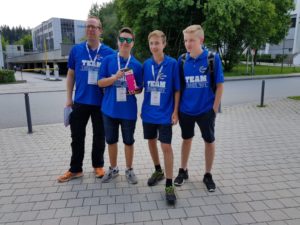 We, RoBITs of Rüsselsheim with trainer Christian Duncker 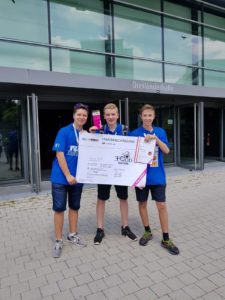 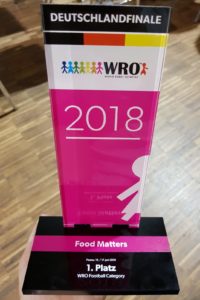 The WRO Cup: first place in the football category