Let's start with some common sayings about exercise and sport. No, I don't mean "exercise kills," but rather things like:

"It's the taking part that counts."

"A healthy mind in a healthy body."

All of these are undoubtedly true – especially since a study has recently revealed that not doing enough exercise poses a higher health risk than diabetes and even smoking. But I am still yet to find a saying, where "together," "fun," or "in a team" are included. These are terms that suit the way we approach exercise and team sports. Perhaps someone will find a good saying and write it in the comments.

Despite a lot of growth over the past few years, we are still a closely-knit team that likes to spend time together during various local events (e.g. visiting the local wine festival or the Christmas market, etc.). But the pounds we "put on" there aren't supposed to stay on our hips. So we have a number of different company sports groups to balance it out. These are casual groups organized by team members that like to do sporty activities together. I want to introduce you to some of them.

Soccer: At the top of the list – what else?

Of course, we have to kick off with soccer – the long-reigning number one sport in Germany. Playing soccer together was already well established back when I started at //SEIBERT/MEDIA, and that was a long, long time ago.

As a former soccer player, it is always a great pleasure to get out onto the field. We rent a hall or meet at a public soccer pitch every Monday evening from 6 pm for an hour-long kick-about. The quality of play isn't important. We have experienced and newbie soccer players, some come almost every week, and others are just one-kick-wonders. I want to give a special mention to Mareike and Sabrina who are there almost every single week. I often use the two of them as a great example of how soccer can be fun for women too when I try to recruit new female colleagues to play.

An hour of soccer often ends with a 12:13 or something like that. I actually just made that up, as we don't really keep score. Fun is always the top priority. But we still manage a double pass from our school days, or a breakneck, sideways block (not so common).

Afterward, we sit down together at our regular table for a juice or beer and talk about the banana shots or other great plays from the evening. As an employee, it's great that //SEIBERT/MEDIA shares the costs for the hall. Although it's not part of our working hours, of course – too bad.

I used to tell everyone at our OpenOffice events that soccer is also an opportunity to let off some steam. Don't get me wrong: There aren't any dangerous sliding tackles on our field, but even Martin Seibert himself has taken a (clean) tackle once or twice – perhaps it's because of his annoying questions in the office 😀 (But that's just between us.) 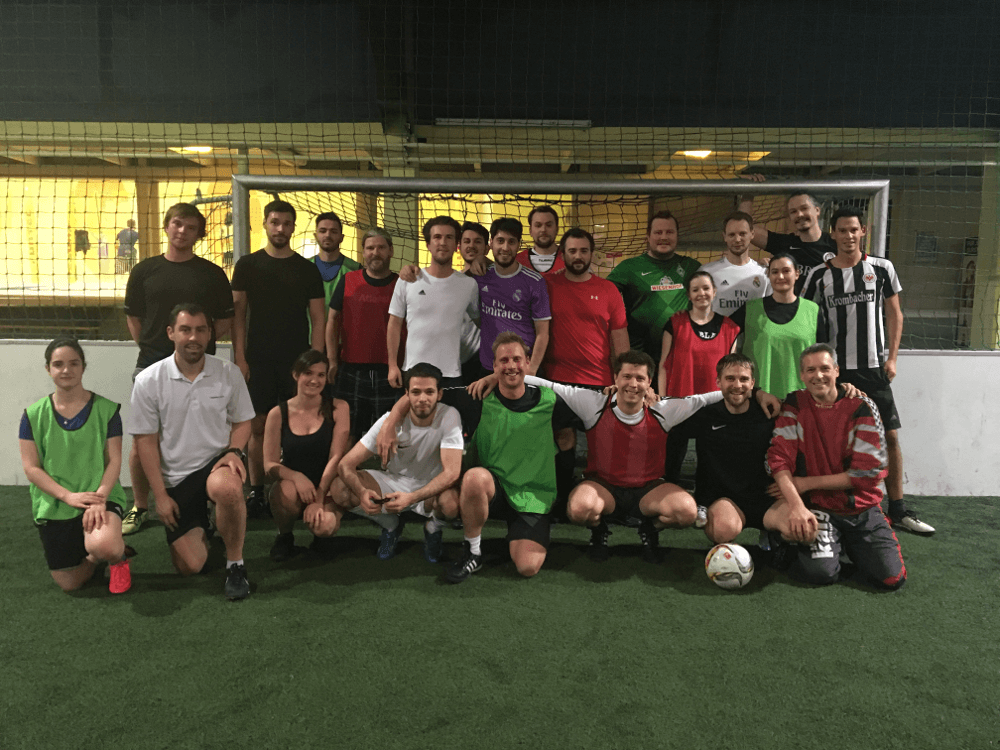 There's no getting around yoga nowadays. So, we welcomed it and jumped right onto the mat. A yoga teacher came to our office for a trial class, and so many people came and liked it so much that we have now found a studio here in Wiesbaden just a few minutes' walk from the office, where we can take classes at any time. And the company shares the costs for that too. This membership scheme has been around for years now – I can't even remember exactly when it started.

Martin often talks about how his regular backache vanished since he started yoga. Whenever anyone posts on our internal microblog asking for a recommendation for a doctor or physiotherapist for back problems, it doesn't take long for someone to suggest they try going along to a yoga class.

What more do you want? Yoga subsidized by the company and you can choose when to go and which classes to take. Now whether anyone wants to see Johannes or me in yoga pants, that's another kettle of fish. (But to be honest, we usually wear jogging pants or shorts. It's for the best.) 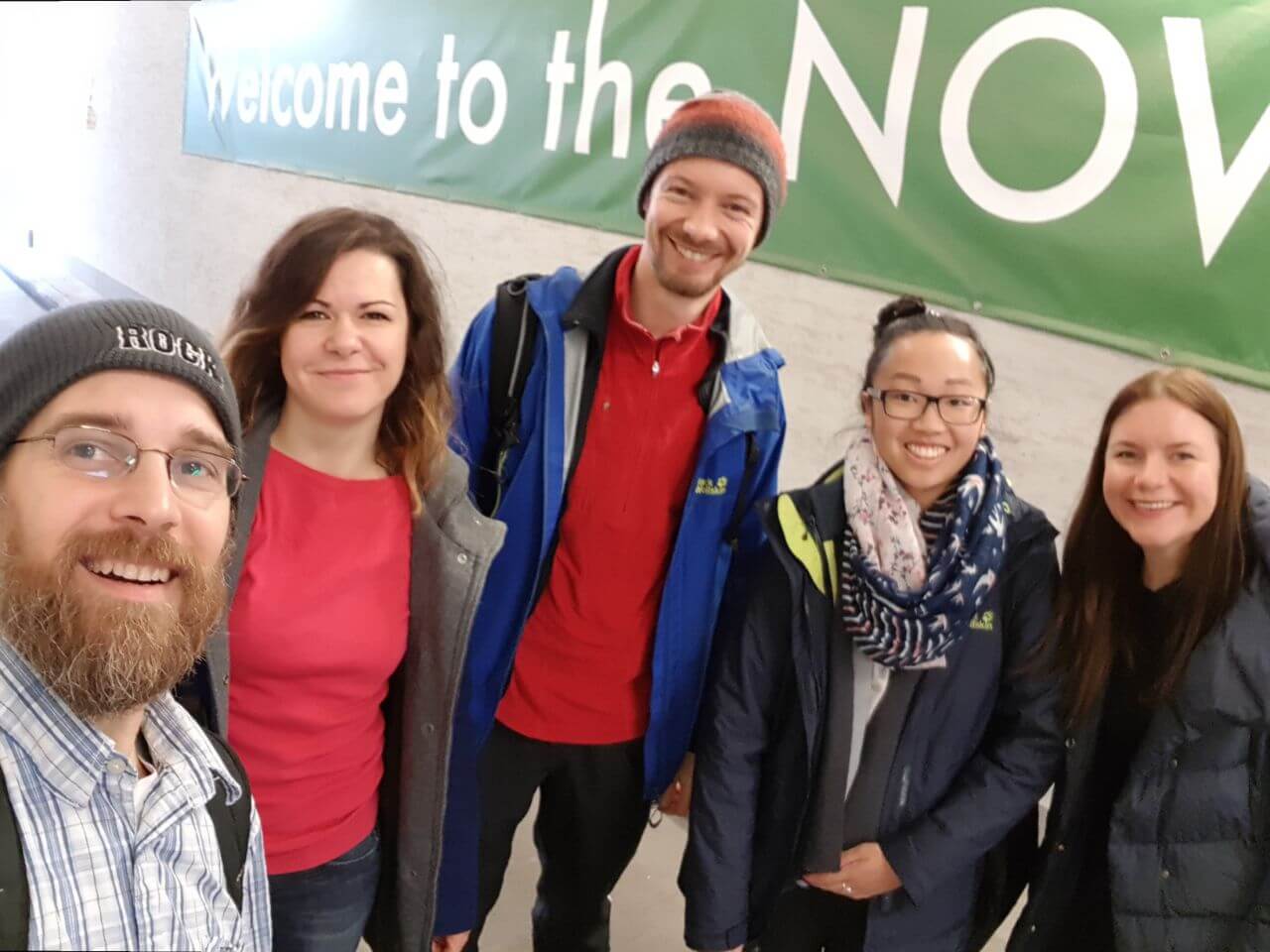 Jogging: Running on the rumor mill

Our jogging group has been around for about four years now. It all began when we started training for the annual Charity Walk & Run Wiesbaden: Some colleagues wanted to take part but were still a little out of shape. So a small group formed around Inga and I, and we decided to head to Wiesbaden's Kurpark after work on a Wednesday to jog a few easy rounds.

What started with just three kilometers grew to 14 kilometers at one point (which of course went up continually over time). We use that argument to get new colleagues on board: Newbies jog around the Kurpark two or three times, while the more experienced runners do eight or ten rounds. If at any point you decide you're done (or dead), you finish the round and head back to the office.

We finish off with the staircase at the LuisenForum building: From the ground floor right up to the fifth! You do hear the phrase "Oh no, the staircase! I completely forgot about that ..." Once we're done, the office shower proves that it's worth its weight in gold; that way, you don't have to go home in sweaty clothes. We decide who gets to shower first depending on our plans for the evening (work or private) and it usually goes pretty quickly.

Most years, 15 to 20 team members take part in the Charity Walk & Run Wiesbaden mentioned above. They donate all of the entrance fees to children's charities and other aid organizations.  Running for a good cause is great! 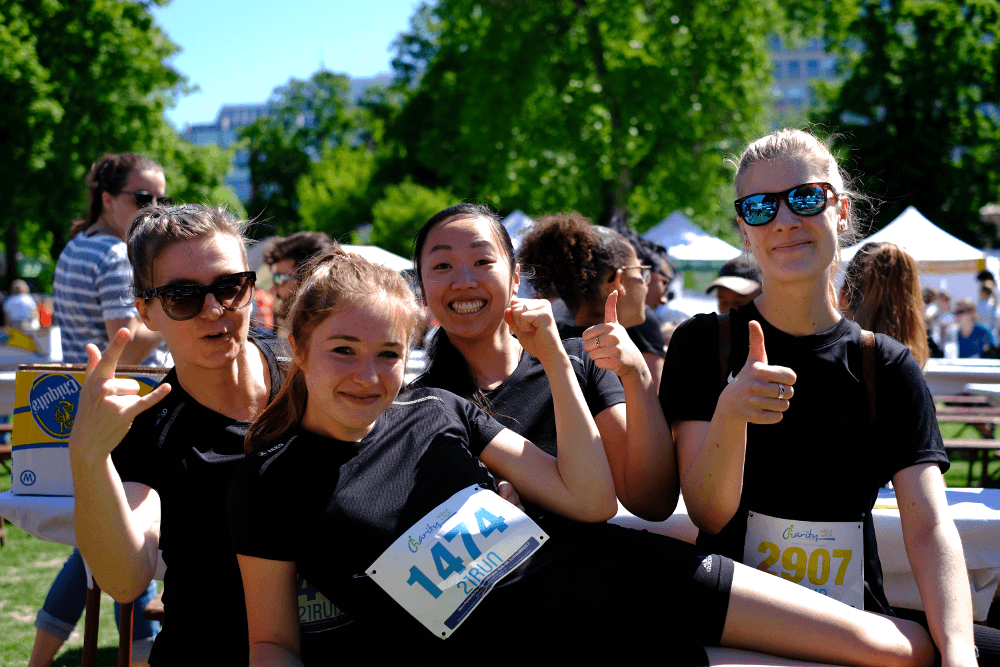 Hiking: Discovering nature in the Rheingau and Rhein-Hessen regions

Those who want to experience nature, team building, and exercise all together can put on a good pair of shoes and join Christian and co. Want to get to know your colleagues without running around a soccer pitch or while in downward dog on a yoga mat? Then hiking is a great option. We have a number of experienced colleagues that always find fantastic hiking tours in the region and take care of all of the administration too. The routes are between 15 and 20 kilometers long. Naturally, the group then finds a cozy place to eat and chat afterward.

Badminton: A sport with speed

If a soccer match doesn't satisfy your sporty side, you can join Paul for a round of badminton. He has been part of the badminton club in Eltville for a long, long time and has invited us to join him for a training session there many times over the years. Whether you're a beginner or advanced, everyone's welcome.

Just don't overestimate yourself – it's the worst when you think you can play and then come up against someone that really can play. I've made that mistake a few times myself and got served. 😉 Paul tends to stand around at the front (on the cross marked on the floor) stretching his playing arm out to the left a bit or to the right, flicking his wrist. At the same time, the other player is left completing a mini-marathon running back and forth, to the left and right on the small court, occasionally whacking the shuttlecock with all their might to try and get it to the other side.

We always make a donation for using the hall, nets, rackets, and shuttlecocks to support the club and its youth teams. It's great because, after all, a small club is always happy to get a few extra euros. 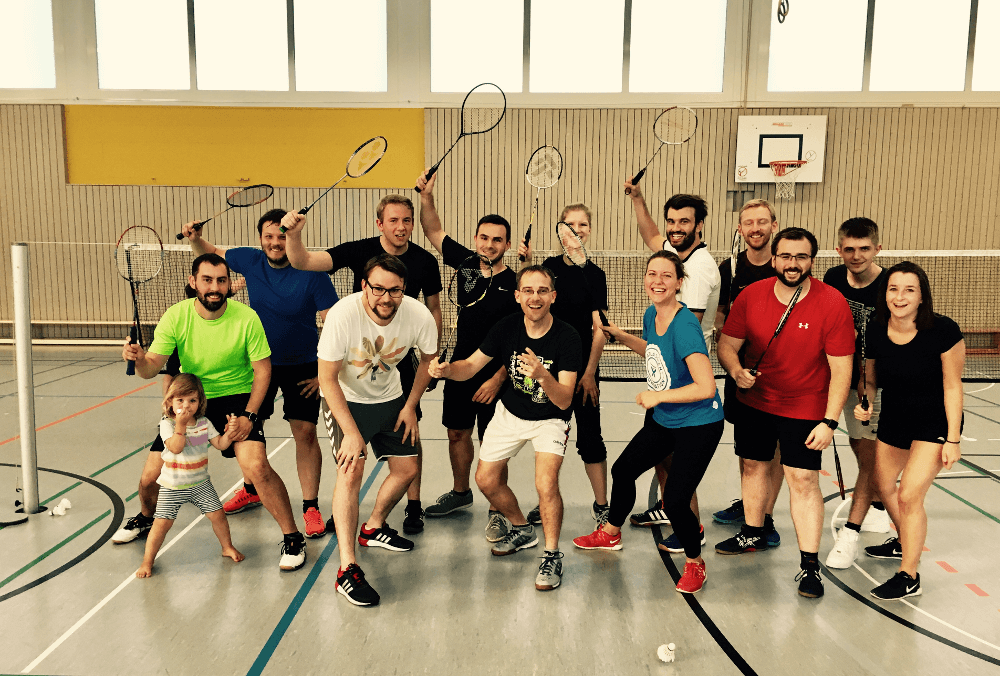 What else and what's next?

Let's finish off with the (first) highlight for 2019: I have made an agreement with our new team member Maria, that she will introduce a beginner's course in boxing, as she regularly trains in Krav Maga and boxing herself. But don't get the wrong idea! I'm not just doing it to get revenge for the annoying questions in the office with a left hook... No, no, no! 😀 I'm sure it will all be very civilized.

We've added many types of sports and activities to the program over the years. And we are happy to try new ones out and perhaps even make them regular things that we can do together.

Perhaps you'll join us next time? Take a look at our current vacancies: We currently looking for Linux system administrators, IT service managers, and team members for different support roles, among others. And if you want to learn more about our way of working, visit us at one of our OpenOffice events. We look forward to meeting you!

Agile organization at //SEIBERT/MEDIA – from brainstorming to realization
Employer Branding: Engaging activities for an even better working environment
Employment portal with information for applicants (in German)