Modern software should help you keep all employees within your organization informed, no matter where they are. 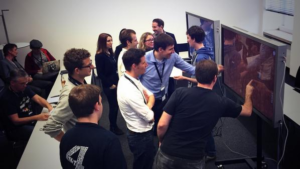 Pamela Winter was upset. Her boss was upset. And for very good reasons. It was the end of a long day spent together, stepping through a ‘learning experience’. The focus group had deep dived into the negative results from the recent employee satisfaction surveys conducted by HR. It was eye opening and more than a little depressing.

The employees were not happy. Workers without a fixed workstation were especially angry. They felt left behind and fully disconnected from the rest of the company. They could not see that anyone cared about them or the value they provided.

Corporate communications only works when you can reach your employees

But it was just as bad for Michael Miller, the CEO. The results were leaked to the press. Michael was dragged over hot coals during the quarterly earnings call. The stock price plummeted. Whether or not the survey was the cause, he vowed to Pamela the next day that he would change things.

So here they were, spending time with the employees “on the ground”. The ground crew, engineers, pilots, cabin crews, gate staff – everyone was invited to participate. Michael wanted to show that everyone mattered and that he truly cared. After all, he was more than satisfied with the company’s performance. A catered lunch for 100 people in one of the hangers was a great choice – great food, an open atmosphere and encouragement for everyone to say exactly what was on their minds. The smaller group discussions were enlightening.

Learn what is needed - talk to employees from all departments

The survey results hadn’t lied. In the larger groups, the conversation was direct and sometimes even a little hostile.

“My wife knows what’s happening first! When I get home, she tells me what’s been going on from the press releases and the blog posts published that day. Why are we kept in the dark?”

There was grumbled agreement from the staff who worked outside of the office. “What internal news? We find things out about our workplace in the media!” Michael saw no point in defending their performance.

Their current processes were not good enough – internal news emails were sent out semi-regularly by Pamela, and the section reps pinned them to a wall. The most recent printout in the cafeteria was from several days ago, announcing this discussion event. Pamela knew that the current system did not work.

An intranet only works when everyone can use it

Michael was annoyed – even if he wanted to reach everyone, especially those providing value on the ground (or in the air), he couldn’t. Until now, he hadn’t really thought about it. This group of employees numbered in the thousands. They were the majority.

“They should be able to participate and be proud of how we are performing, as an entire company. In the office, we see the numbers, get the customer feedback and pat ourselves on the back each day. We are doing amazingly well! And they are the ones who make it happen. We need to include them.”

Michael was right – this was not only unfair, but incredibly demotivating. And it needed to change.

They’d adopted Atlassian Confluence a couple of months ago and were still getting used to it. Michael had started blogging weekly updates, and corporate communications had added some of the great customer feedback. It was a good start. But they’d only bought enough seats for the office staff, not everyone in the 7600-strong company.

Pamela was annoyed when he now insisted that everyone must be able to access the platform. It was Michael who cut the budget for her “experiment” at the beginning. She’d argued for an unlimited license so that they could integrate external freelancers, partners, suppliers, in addition to the full workforce, but it was knocked back. After today, the budget was no longer a problem. He finally understood. Spending a day talking with and listening to everyone had been worth it.

But was this Confluence wiki thing ready for the spotlight? Her team felt it was ugly and “too technical”. The current company-wide intranet was an outdated version of Microsoft SharePoint and it was terrible. No one used it. They still kept emailing files around.

She would need to look around, compare a few alternatives like Office 365 or G Suite. But Michael wanted to be able to reach everyone, right now. “Tomorrow …” She tried to quieten her mind as she fell into bed. It had been a long day.

Tools need to support team collaboration in the way they prefer

As Pamela briefed her team, she was surprised to learn that Michael had instructed Theo, the CIO, to give her all the support she needed. Michael didn’t want to wait. CEOs rarely did. The IT team took over, and got to work on evaluating alternatives. They started developing a concept on a central Confluence page. They weren’t fond of the Microsoft solution either - that was one of the first comments on that page.

Pamela subscribed to the page and saw a continuous stream of change notifications hit her inbox as IT powered ahead. She did not lead this process, but the notifications kept her informed and in the loop. 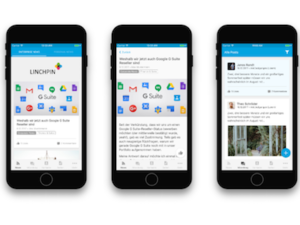 A collection of apps known as the Linchpin intranet suite rose to the top of the list – it would provide all the functions she needed for internal news publication and distribution. Pamela’s colleague Kathrin installed the mobile intranet app on Pamela’s phone. When it prompted her to allow push notifications, she was sold.

They could reach the ground crews on their smartphones!

Jackpot! Everyone had a smartphone nowadays. No computers were needed. Notifications would make sure the employees heard what was happening first.

Mobile intranet on your own device? Reach everyone effortlessly!

Pamela went straight to Michael’s office to show off the app with its demonstration environment. It worked flawlessly. He loved it! “How long will it take to get it working with our intranet?” Patience wasn’t one of Michael’s strengths.

“The way it looks now is an out of the box thing – just a demonstration,” she explained. “But as we are relatively new to Confluence, both IT and Comms would prefer to hire a professional service partner who knows this inside and out. That’ll get us up and running faster, with fewer problems.” It was an easy sell – the service partner she had in mind had affordable fixed-price packages. And they didn’t even need to buy any hardware - they could get their employees to install the app on their own mobile phone.

Michael only had two concerns: “I hate push notifications, why should we expect our staff to love them? And, can we rebrand this app? I want it to look like us – we aren’t Linchpin Mobile!”

Get the information you need, when you need it with personalization

Pamela went away and looked into the range of Confluence apps included with Linchpin. Personalized news? Fantastic! That would mean only those who needed to see something would get a notification. The second worry was quickly solved – the Linchpin Mobile app could be easily customized and rebranded. It would fit right in with their new intranet design.

Six months later and no employee was left behind. Everyone kept on top of all the company news. Productivity was up, the stock price skyrocketed, Pamela got voted Communicator of the Year, and they all lived long and prospered.

Corporate news reaches everyone with the Linchpin intranet suite

While the previous paragraph is a bit far-fetched, everything else has been true of the many organizations we have met and work with. Reaching all of your employees is hard when you are stuck with old tools and processes. Modern technologies have solved this problem.

Come and have a chat about your requirements and we’ll demonstrate just what you can achieve with Linchpin.