Late last year, I attended DACHFest 2018 in Munich. This time it was all about diversity and accessibility. First of all, the invitation from Google for this event was a little perplexing: DACHFest? Apparently this is an event in the tradition of the DevFests, but for the DACH region - hence the name. While Google promotes the event and it is sponsored by some related companies, it is not organized directly by Google.

I expected it to be less promotional, and as I have had far too little to do with diversity and accessibility up until now, I thought it was a great opportunity. So, I decided to go and to report back internally and then publicly! No sooner said, than done.

Around one billion people on planet Earth depend in some way or another on accessibility to use the internet on a daily basis. Among them are almost 300 million deaf and hearing-impaired people. Similarly many are blind or visually impaired. That is approximately twice the population of the United States. But there are more. Every twelfth person is color-blind. People are born without hands, develop Parkinson's or lose their fine motor skills through accidents or wars.

There's a huge audience for whom you should keep accessibility in mind, because otherwise they might not be able to use your products at all. However, it's often not that easy to find resources on accessibility best practices, specifically for designing website interactivity.

I'd like to mention a term you might not yet know: a11y. Similar to i18n and W3C, a11y is a numeronym. The A in Accessibility is followed by eleven more letters (11) and then a Y. In addition, a11y looks like the English word "ally" - and allies do not tear each other apart, but want to advance a cause together.

I wasn't sure how to feel when I heard this explanation from a participant. The discussion about diversity, and above all, the now-negative term "Social Justice Warrior", have clearly left their marks. But as long as this strengthens the cause itself, that may not be so bad.

An interface between society and web technology

Apropos diversity: That was the main focus of the opening keynote. Sasha Romijn told of her own transition to be a woman and the Stroopwafel magician in the Secret Society of Happiness. Fortunately, the talks were recorded; I wouldn't know how to do justice to the powerful impression Sasha left in the form of a summary. 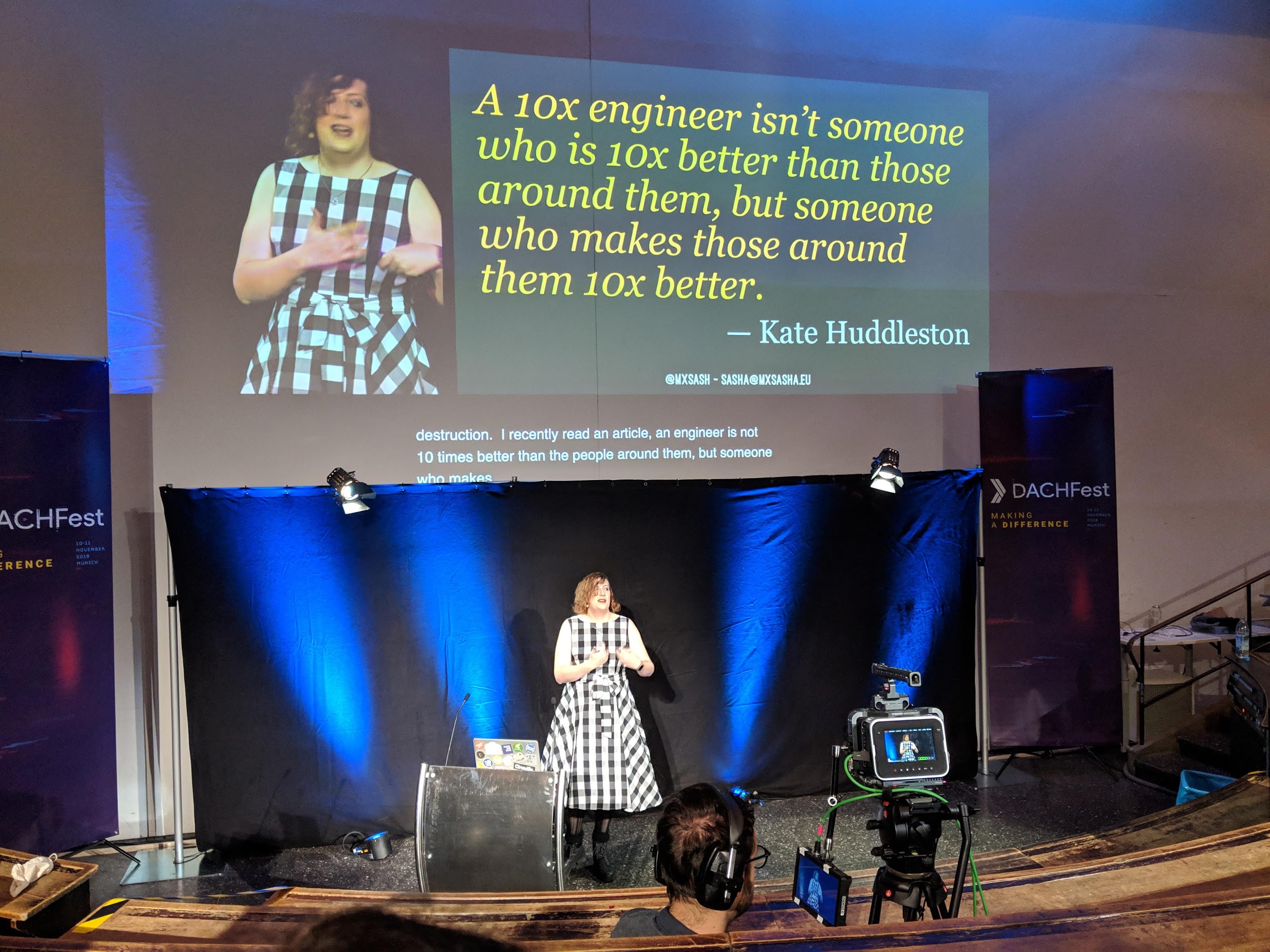 However, not all of the presentations were so heavy: Stephanie Nemeth built her own Smart Fashion - or haute codeture, as she calls it. Then she walked along a busy street at night while the internet decided what her outfit would look like at any moment. And yet she's actually quite introverted. It's the Internet of Things but in the opposite direction -- she made a Thing to be controlled by others via the Internet!

There were many talks focusing on technical issues - for example about web and USB connectivity, a brain-computer interface in JavaScript, WebAssembly and doing Virtual Reality in a browser. These are all topics that may have less to do with accessibility and diversity, but can provide development impetus at tech conferences. I'm grateful to gained such knowledge, and it can live at the back of my mind, until I need it. WebAssembly seems especially exciting for our own company.

All of the DACHFest talks are available on YouTube. There were too many good ones here to pay tribute to all of them, but I would like to briefly comment on a few more.

The most important presentation for me, and the one that convinced me to go to the DACHFest was by Carolyn Stransky about a11y-compatible documentation - there was so much that could be used immediately for end-user websites, that I decided to run the tools Carolyn mentioned against our products during our next company hackathon to see how we actually performed in this respect. 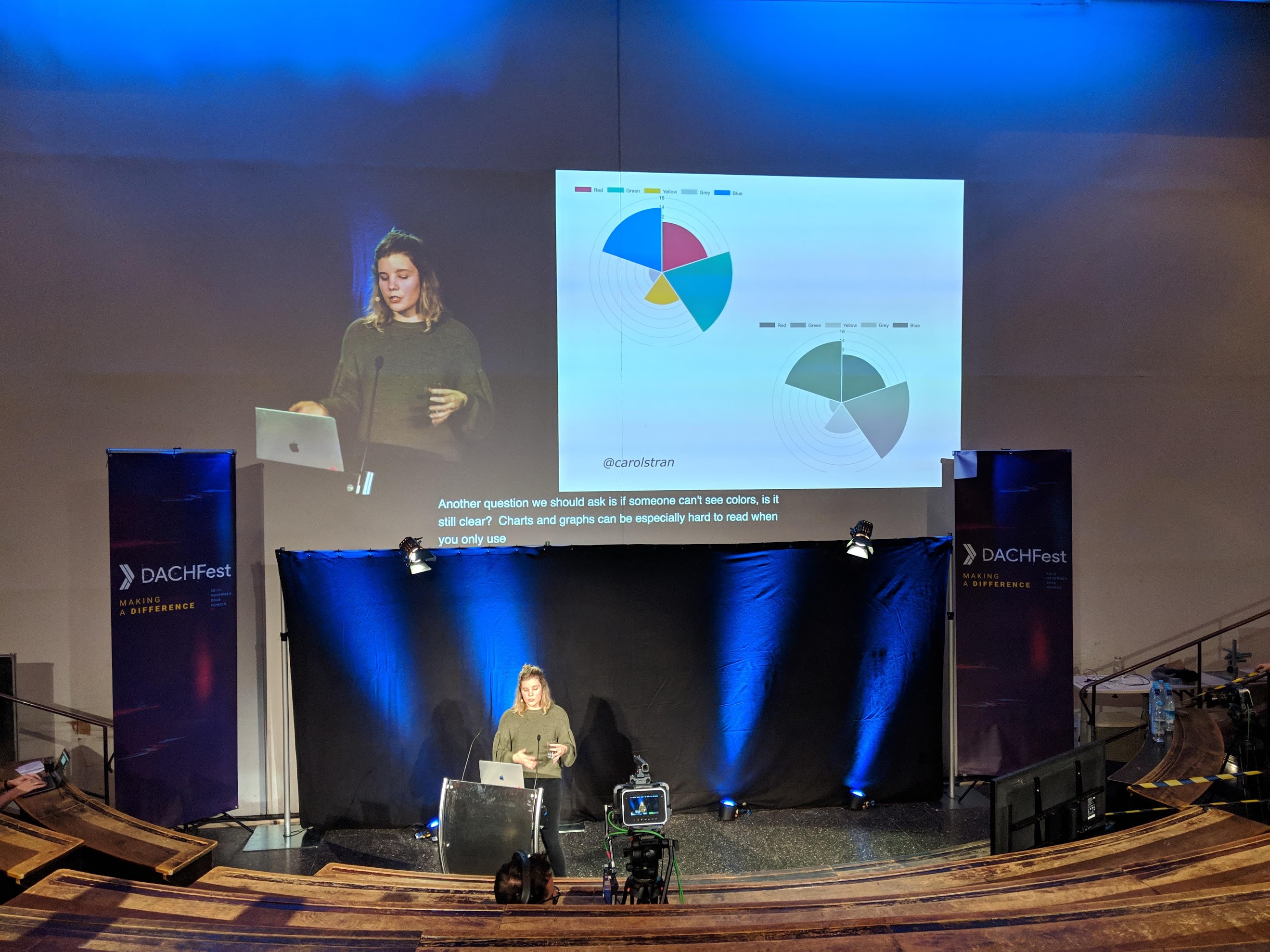 I would like to emphasize the politically most impressive talk at DACHFest: Hawra Milani told about her time in Iraq, where she founded a Google Developer Group for women interested in software development on site. Inspiring!

I was a bit surprised by a few management talks that were mainly about inclusiveness. In her presentation, A Quick Start Guide to Management, Jessica Rose packed so many truths into those short minutes that I'll have to watch it again to register everything.

On the second day, Enrico Foschi also had an interesting surprise in store: He explained how it is possible to engage employees who otherwise may find it more difficult in a typical workplace (depressed, ADHD, people with anxiety disorders) in a quasi-scientific way. His conclusion: Neurodiversity also deserves inclusivity.

Day two’s highlight was definitely the closing keynote - none other than David Hogue came on stage. In a powerful presentation, he talked about Google's efforts to give people the means to defend themselves against FOMO, the "Fear Of Missing Out". Even if you aren’t interested in tech presentations, I’m sure you’ll find this interesting. 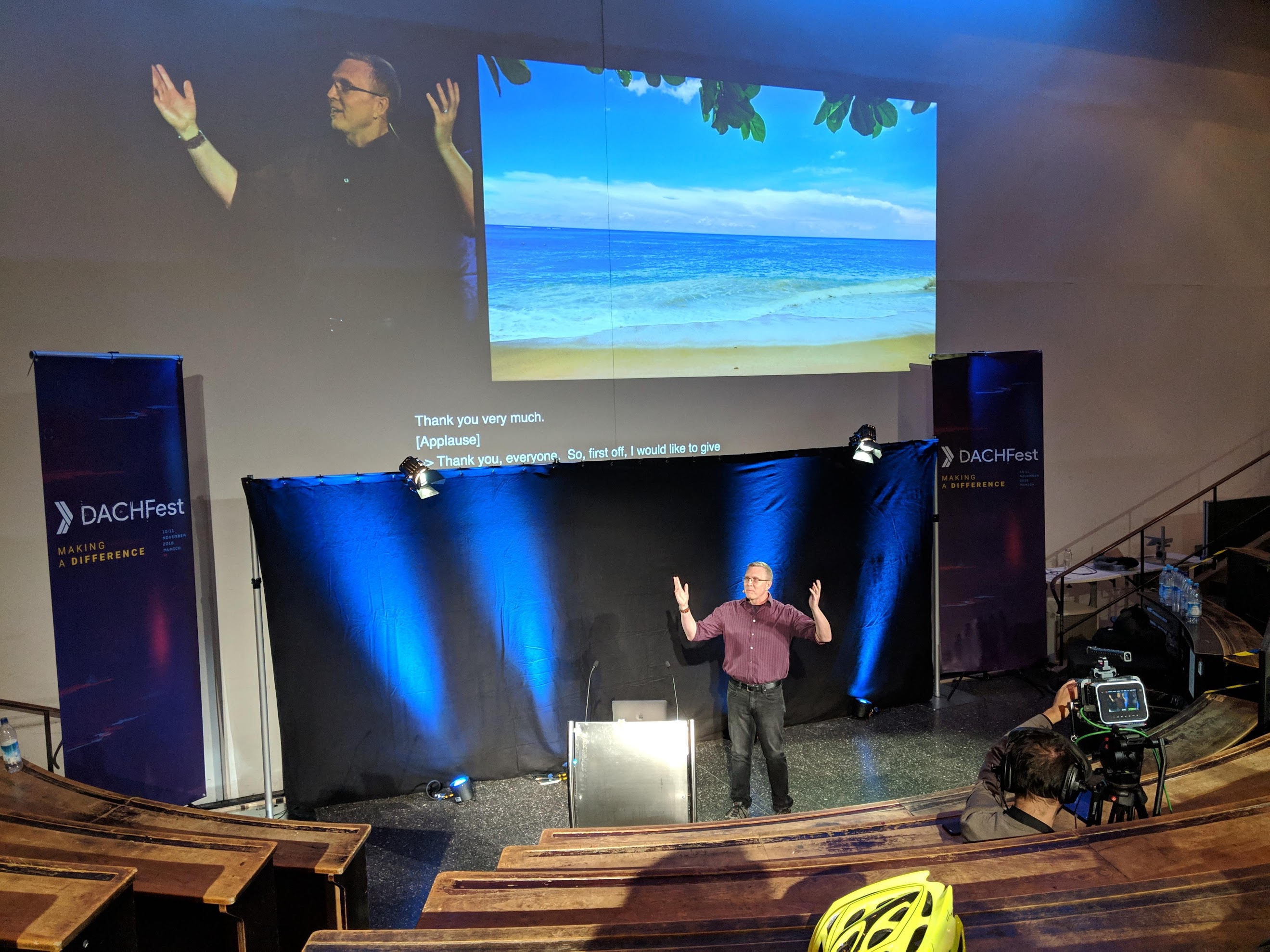 All in all, the trip to Munich was definitely worth it, and even though our Google team at //SEIBERT/MEDIA is currently working at full capacity with things that we still have to learn inside and out, I am pleased that I had the opportunity to expand my knowledge and horizons - and thankful for the work being done by people like Mirjam Bäuerlein, who create such platforms for people like me so that we can go to more conferences and events with less fear. I was fascinated by the software craftsmanship movement. And I was pleased to find my topic for the upcoming internal hackathon.

I knew before that accessibility and diversity were important issues. Now I also know what the words really mean and that it is complex, but not necessarily difficult, to take proper care of them.

Your partner for Google Cloud software

Are you interested in modern collaboration solutions powered by Google technology? We’d be delighted to help you if you have any questions or want to know more about any of the tools available. We are an official Google Cloud Partner and can advise you on the best ways to introduce, license and productively use G Suite as well as help you plan and implement applications using the Google AppEngine or other environments, without obligation.