Here at Seibert Media, we love trying new things, and figuring out new ways to work is definitely one of them.  With summer in full swing, the open road called to Lukas and I.  This year, we wanted to head over to Sweden for our vacation and thought, why not try remote working?  The plan was to work one week and then to carry on with our two weeks of vacation as planned.

Here's what went down:

With a borrowed camper van with no special interior made for camping, we set off to camp in the wilds of Sweden - no campgrounds for us!  That meant, no electricity, running water, showers or toilets.  Mostly fun, often beautiful, and sometimes it really sucked.  The weather and the fact that we were pretty much new to camping made this whole experience relatively challenging.

To work, we used our smartphone hotspots to connect to Sweden's LTE network that was pretty much available everywhere.  My 12 gigs of data were used up one week before the end of the month.  We wouldn't have needed much more if we hadn't come home beforehand.

The lack of power was much less of an issue than we initially had thought.  The campervan had an extra battery, and because we were on the road every day, we were able to recharge it.

Still, we wanted to make sure we weren't caught without power, and decided to try out the following:
- turning off the Macs directly after we got done with work
- disabling the Touchbar
- reducing the display brightness
- remote meetings were done with our smartphones rather than on the laptops
- our IT department gave us two huge power banks (thanks Dennis and Seb!) - one was enough to power a full laptop load
- additional power banks that we had laying around at home and from relatives
- charging the power banks, laptops, and our smartphones with the in-car, 12-volt power source. 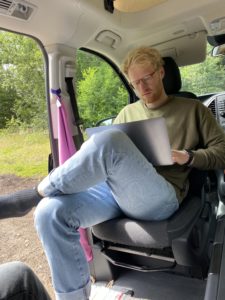 We mostly worked in the camper van itself (ergonomic who?) and if the weather allowed - which unfortunately was very seldom in the week we worked - outside.  Alternatively, we were able to sometimes find a cafe that we could work from for half the day.  Obviously, we didn't have the luxury of adjustable tables, walks to the kitchenette for a coffee break, and a quiet working environment.  Luckily for us, those cafes also had those delicious cinnamon rolls—a win.

Background noise in cafes or needing to switch tables so we could reach a wall socket for charging made the planning and carrying out of meetings difficult at times.  For me, especially as a meeting moderator, it was necessary to find a substitute because I couldn't fully carry out my role. 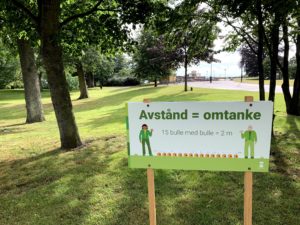 We were unsure if we would need to be quarantined upon our return because there was a travel advisory in place.  However, this was lifted during our trip.  In general, the numbers in Sweden decreased while we were there.  It was interesting to see in-person how Sweden and its people dealt with the situation.  Apart from the signs warning us to keep our distance or the partitions in restaurants in larger cities, there wasn't much to see in terms of a pandemic.  But I have to mention, the country as such isn't densely populated - 25 people per km2 in Sweden vs. 237 people per km2 in Germany.

New things we did or learned 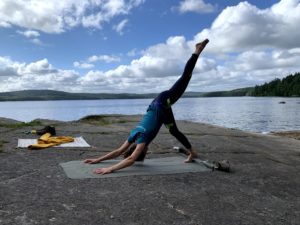 So now you want to camp in Sweden? Don't forget...

Being in Sweden and taking a walk through the moors or looking out at the ocean after a day's work was amazing, of course.  There were, however, a few trade-offs in relation to working.  I missed being in the office where the weather doesn't affect whether I can carry out my job or not.  Lukas, on the other hand, is basically able to make do with whatever he has.  So for people who are easily frustrated (like me, for example), it could prove to be challenging to work while on the road.  That being said, we are definitely going to be trying this again - perhaps with more "infrastructure" like in a holiday apartment or Airbnb.  Our plan is to head down to southern Europe in December, so stay tuned.