This article is part one of a three-part series of articles exploring the findings of a Google-sponsored report, “The Resilience Formula: Overlaying Agility and Cost optimisation” based on a survey that was carried out between August and October of 2020. The qualitative survey was fielded to 300 senior IT decision-makers at a variety of companies from a range of industries spread throughout the following European countries: United Kingdom (UK), Republic of Ireland (ROI), DACH (Germany (D), Austria (A), Switzerland (CH)), France, the Nordics (Denmark, Finland, Iceland, Sweden, Norway), and Southern Europe (Italy, Spain). Google Workspace is a comprehensive business productivity solution consisting of communication tools such as Gmail (email), Google Meet (video conferencing), and chat; collaboration tools such as Docs (text documents), Sheets (spreadsheets), and Slides (presentations); and Drive (cloud storage); and overarching administration with device management and other security features.

“The need for organisational resilience has never been greater. Defined as the capacity to recover quickly from difficulties, true business resilience hinges on the ability to respond quickly to life-changing events…”

That is the opening sentence from Google’s recently sponsored report, “The Resilience Formula”, and given the world events of the last year and a half with COVID-19, many businesses would most likely find a gem of truth in it. It most likely can go without saying, but in the last 12-18 months, across all corners of the globe, the global pandemic has changed both our personal and professional lives. For businesses however, what did not change strangely enough were core priorities. Results of the survey indicated that in actuality, existing trends such as the “digital transformation” were fast-tracked and longstanding priorities took on renewed focus.

What also became apparent in reviewing the results of the survey was a gap in the resilience planning on the part of many companies. 66% of those CIOs and IT decision makers surveyed confessed that their firms were not as resilient as they originally believed themselves to be, and yet most believed this quality of resilience would remain a critical priority even after the pandemic lifts. In order to close this gap and build resilience going forward, Google developed a formula to better define the cost effectiveness of resilience:

Turning then specifically to their own Software As A Service (SaaS) platform, Google Workspace, data from the survey indicates that companies that make use of Workspace as their primary collaboration tool showed a higher level of resilience than those who used it less extensively.

“Even if there is increased pressure on costs and budgets, the pandemic has been a way for IT leaders to make the point: ‘we need to transform now’”

Grateau stated that timesaving is one of the key ROI metrics most decision makers at these firms surveyed. Although this has always been a trend, it’s acceleration has increased drastically. “IT leaders are looking at the ROI [of new tools and solutions] and need it to generate a productivity gain,” Grateau says. He continues, “You need to provide the best tool. And the best tool is not necessarily the most complex one or the one with the most features – it’s the simplest and easiest to use, as that’s the one that really facilitates adoption”.

Embraced by almost 2 billion users, Google Workspace is a good example of this. “It’s consumer-like technology that is designed to be used without any training”, Grateau explains. “Because it’s intuitive and seamless, people start to use it. They experience the benefits almost immediately, and the business as a whole starts to benefit very rapidly.” 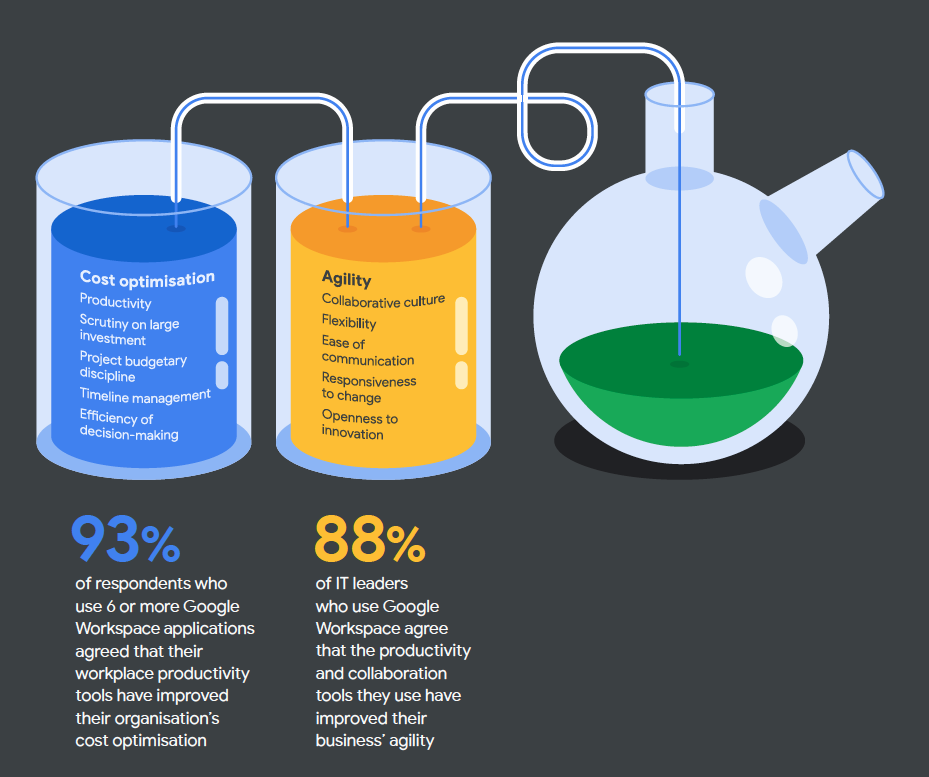 Breaking It All Down

The survey results were further broken down into five subcategories regarding cost optimisation and agility. Each respondent to the survey was asked to rate their own companies on a score out of ten on each of these subcategories. Finally, the scores across all ten subcategories were combined to calculate a total resilience score out of 100 possible points.

92% of companies surveyed fell within 65 and 85 on the resilience scale. For those firms where at least half of employees were using Google Workspace, those organizations were five points higher in this 20-point range than organisations who used other providers for their primary solution.

time spent using the tools, and percentage of employees who have access to them. In

Part two of our series, “Optimisation and Agility: Play Well Together” further examines the relationship between agility and cost optimisation presented in the Google-sponsored survey, “The Resilience Formula: Overlaying Agility and Cost Optimisation” which was carried out between August and October of 2020.

Get the full whitepaper "The Resilience Formular"