Back in the day (the early 90’s), the US car industry was in decline, but the engineers and managers at GM wanted to take the fight to the Europeans.
The idea is to produce a high-performance sports car that could compete with the Germans and Italians yet remain affordable.

This needed radical thinking, so GM (General Motors) went outside their regular engine design team and contacted Lotus, a performance British car company.
They came up with the LT5, a 4 cam 32 valve V8, a beast of an engine.

Initially, it was a huge success offering stunning performance. However, shortly after its launch, some customers started complaining that their engines seemed to self-destruct, and no one knew why. The world’s motoring press was on to it. They smelt blood, the new Corvette appeared to be a liability.

And here we enter the world of Root Cause Analysis. It’s the science of getting to the fundamentals of a problem. It’s a big picture solution whereby every single factor, no matter how trivial, is cataloged and common factors linked complied, allowing the puzzle to be solved.

Root Cause Analysis (RCA) is the process of discovering the root causes of problems in order to fix problems. RCA is a much more effective methodology than fixing ad hoc problems and emergency firefighting. Instead, Root Cause Analysis seeks to find the root of the problem to offer a permanent fix.
It can be performed with a collection of principles and techniques, but mainly visual or diagramming methodologies that can all be leveraged to identify the root causes of an event or trend.

Proper visualization is critical here. All of the facts presented visually in diagrams give the team the chance to make sense of the problem.

With draw.io, you can whiteboard, and Cloud users can collaborate in real-time. Teams worldwide working together on the same diagram inside Confluence seeking to find the root cause of a problem, reassured by the security draw.io offers, essential when the world’s press is digging for a story.
No other diagramming application in Confluence can offer this. In fact, no other diagramming app can offer the technical use cases or functionality, never mind the security that we provide.

Problems exist, and solutions need to be found. There is no better way to solve the big mysteries than using root cause analysis, and there is no better solution inside Confluence than draw.io. 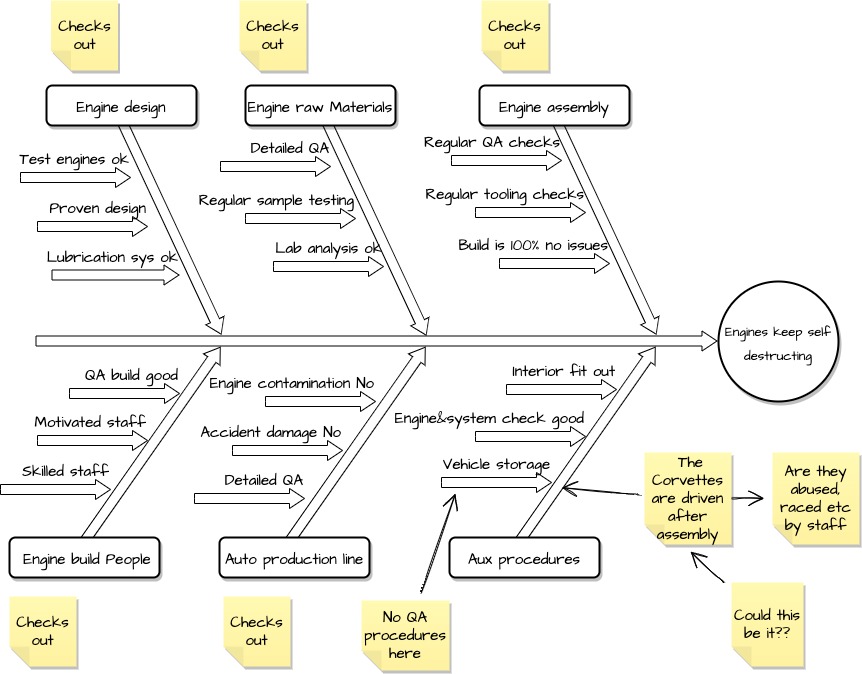 To help get you started, draw.io offers several Fishbone templates.

The diagram above is greatly simplified, but it gives an idea of the process; multiple processes can be considered in parallel and comparisons made.

We continue, the mystery of the self-destructing Corvette engines

General Motors was responsible for the final assembly of the automobile in Kentucky. However, the engine build had been subcontracted out to Mercury Marine in Stillwater, Oklahoma, a precision engineering company. And, of course, Lotus, the British engine designers.

So here we have three separate stakeholders and one mystery problem, who was responsible? So you can imagine the atmosphere in their many meetings.

I would like to say GM embarked on a detailed Root Cause Analysis program to find the issue, but they did not.

After many investigations, countless flights from the UK to the USA, and many emergency meetings between all three parties involved, little to no progress had been made. Until one fateful day.

Lotus cars were under immense pressure to find a solution. They were, after all, the engine designers.
On one icy winter morning, as another meeting began in the US, the Lotus engineers could hear a Corvette engine screaming in pain, close to self-destruction.

They discovered one of the GM employees whose job was to move cars from the parking storage lot to the shipping lot did not like sitting in a cold automobile. So they proceeded to rev the engine to its max rpm or redline it to quickly warm the engine and the auto’s interior. But unfortunately, the engine oil had no chance to provide proper lubrication when cold, and especially since these were brand new engines, the damage was immense.
New engines need to be gently driven for the first few thousand miles to assist in helping the various components bed in properly.

It was pure luck that Lotus and GM managers discovered the issue. It’s a great example of how one single simple action or an untrained employee can almost destroy a company’s reputation. And its also a great example of how diagramming and Root Cause Analysis could have helped. But unfortunately, in this case, they opted for endless meetings, which did not work.
Problem-solving, it’s all about the big picture and looking for knock-on effects, action, and reactions.

If you eliminate the impossible, whatever remains, however improbable, must be the truth
- Sir Arthur Conan Doyle - Sherlock Holmes: The Sign of the Four

There are several takeaways from this Corvette story

Firstly, employee education is vital regardless of the task, and diagramming can immensely help training and staff onboarding. The most straightforward misunderstanding can have enormous consequences.

Secondly, the use of problem-solving methodology and diagramming in problem-solving is critical. Don’t leave it to chance. In this Corvette story, the following all had to happen.

Had anyone one of these random criteria not been met, then perhaps Lotus and GM may not have found the issue in time, and the worst-case scenario would have been the demise of the Corvette. Being short on money, GM was looking for savings and badly needed a win.

Ultimately, the C4 ZR1 Corvette was a stunning automobile. Once this issue was addressed (staff training), it went on to break several world records, and bearing in mind it was a mass-produced car makes this all the more remarkable.
It was the rebirth of this American icon. Even today, owners of modern Corvettes look back fondly at the 180 mph auto that even had an element of stealth (avoiding radar speed traps) built into its design. It was a rocket ship that could see off the best of its European competition.

Today’s GM has gone from strength to strength. The latest Corvette, the C8, is an incredibly desirable auto even in Europe, offering superb performance, build quality, styling, and practicality.

The 1990’s C4 ZR1, when launched, caused many late-night meetings in Munich, Stuttgart, and Ingolstadt, Germany. It re-cemented the Corvette’s reputation, and today is responsible for the latest C8, but it could have ended so very differently.

You may have the most wonderful piece of code or project, but errors still keep cropping up, and your team is stumped.
It’s time to employ other analysis methods.

Visualization works. There are tried and tested solutions involving diagrams to solve problems. It’s human nature to just think, “we can quickly solve this in a meeting,” but that is sometimes not the case. Specific methodologies are required, which usually involve a visual representation.

draw.io is more than just a diagramming tool; it’s an essential work tool.

Keen to learn more, visit our YouTube Channel for a constantly updated playlist of how-to videos.
Visit our one-stop tutorial shop to pick up all the ins and outs of draw.io diagramming.
Or book a free no-obligation demo to learn more about the limitless ways in which draw.io can make life easier and more productive for you and everyone in (and outside) your company!
Happy diagramming!